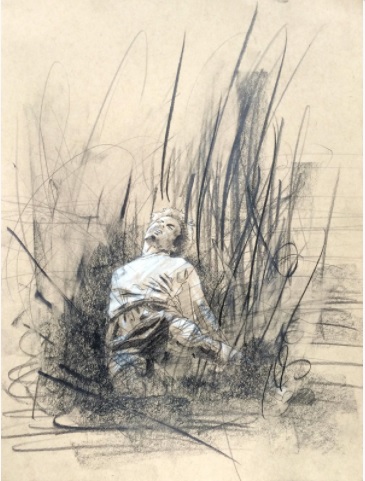 There is no question that God made Ezekiel to endure his calling.  The name Ezekiel means, “God Strengthens,” indicating that only God could have strengthened him for the work. God does not allow crucibles in our lives that He has not equipped us to bear. There is no trial that He has not provided a way of escape (1 Corinthians 10: 13). There is no ruin for which He has not already prepared the restoration, here on earth or there in eternity. Ezekiel was born to endure the ruins. God adequately prepared him for what was ahead.

Ezekiel was mentally prepared for the ruins: “But see, I have made you hard and stubborn too—as tough as they are. I have made your forehead as hard as rock” (vs. 8-9). Acceptance is the hardest part of the ruins. God revealed the hardships and Ezekiel had a hard time accepting the challenges, but God gave him peace. In his times of fear, God gave him encouragement, “don’t be afraid.” In his times of doubt, God gave him assurances. What has Ezekiel mentally endured that we have not? Like Ezekiel, we become bitter about the hardships, we hurt, we doubt, we fear the outcomes, but God told Ezekiel the same He wants to tell you, “see, I have made you” for this.

Ezekiel was spiritually prepared: “Son of dust, let all my words sink deep into your own heart first; listen to them carefully for yourself” (vs 10).  After God mentally prepared Ezekiel, He equipped him with wisdom from the word; he had to eat the scroll. God strengthens us to accept, but it is the word of God that keeps us grounded and keeps us going straight forward.

Ezekiel was physically prepared for work: Son of dust, I have appointed you as a watchman for Israel; whenever I send my people a warning, pass it on to them at once…,Then the Spirit entered into me and set me on my feet (Vs 17, 24).  Feeling worthless, He fell face down, but God’s Spirit lifted him up and gave him a sense of purpose. After God transformed Ezekiel’s mind and heart, then, he was physically ready to work. Even hardships comes with spiritual responsibilities. Ezekiel had his load to bear and the Spirit gave him strength for the work. As God called Ezekiel to be a witness in the ruins, He calls us, and only He can “set us on our feet” in active work for His cause.

As mentally, spiritually and physically prepared as Ezekiel was, was he ready?  No! Definitely not! Only God’s spirit can get us ready, not before the moment, not after the moment, but for the moment. Moses gave some excuses when he was called. But God told him, “Now go ahead and do as I tell you, for I will help you to speak well, and I will tell you what to say” (Exodus 4: 12). Jesus told His disciples, “do not worry about how to defend yourselves or what to say. For at that time the Holy Spirit will teach you what you should say” (Luke 12: 12). We will never be ready for the ruins, but moment by moment, hardship by hardship, struggle by struggle, disappointment by disappointment, the Spirit is there to take us through the ruins.

It’s hard to think that God made us to endure diseases, hardships, broken relationships, lion’s dens, dungeons, prisons, slavery, heartaches, famines, earthquakes, etc. However, I dare to say, yes He did! Some survive these ruins and some pass away in these ruins, but only those who don’t hold onto God’s hands perish. Samson passed away in the ruins, but He didn’t perish. Where we end up all depends on our surrender while we are in the ruins.

God has made you for the ruins of your life, whether they may or may not be your fault, your failures, your disobedience, or your disaster. However you want to look at it! God wants to use the ruins to teach you first, to save you next and use you in the end. Won’t you let Him use your ruinous experience to love you? His love may seem harsh at first, but it will do you good in the end.  Remember God led the Israelites from the ruins of slavery into the “great and terrible [ruins of the] wilderness wherein were fiery serpents, and scorpions, and drought, where there was no water” (Deuteronomy 8: 15 -16). But God provided water when they were thirsty. He provided manna when they were hungry. He disciplined them when they were wayward. Why?

Trust him to take you through the ruins. Wherever He leads He guides. Whatever challenges He brings you to face, He also brings the victory.  Whatever hurt He allows, He also brings the healing. He knows the way out of prisons, dungeons and dens. Don’t think that you are not strong enough, if God allows it, then God has made you for this. God is Lord of your Ruins. All He wants you to know is that He is Lord, so let Him be Lord in your life.

Psalm 139: 15- 16, “You were there while I was being formed in utter seclusion! You saw me before I was born and scheduled each day of my life before I began to breathe. Every day was recorded in your book!”