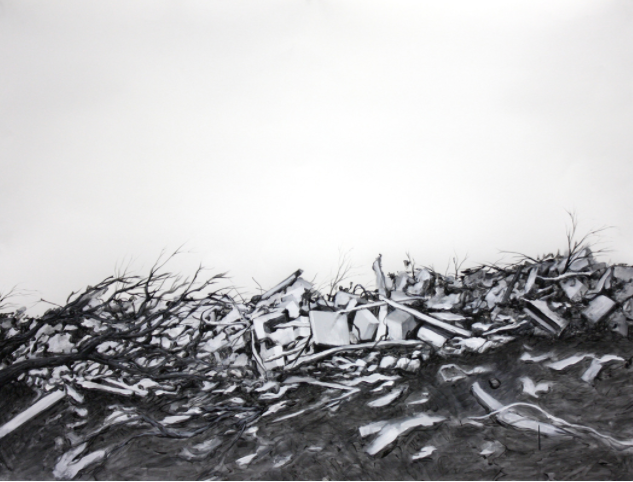 When I think of a graveyard, finality, silence, ghosts, captivity, sadness, as well as ruins come to my mind. In this context, it is so easy to draw a parallel between the ruins in our lives and the graveyard. For right at the door of ruin, death lurks. Right in the heart of ruin, there is a sense of helplessness.

The ruins is a place where death is always lingering in the shadows waiting to capture those who fall under its suppressing claws.  The ruins can make us numb, and insensitive to the truths that surround us. We can become indifferent, uncertain, doubtful and depressed. Depression is common in the ruins, and in many ways it is a replicate of death. The ruins of sickness sometimes suck people in to death’s hell hole. For the Israelites, the ruins was like the haunting graveyard of dead bones. The ruin is a place where those who once lived with vivacity are now silenced, seemingly never to return. In the grave yard, life has no meaning, all chances are done. There is no restoration, no return, this is it.

That is, until God takes a stroll into the graveyard.

God has such a funny way of demonstrating His power as the God of the universe. He made the sea to stand like walls. He caused a towering monstrous wall to tumble like crumbs to the ground. He used a single smooth stone to kill a massive giant. He turned a stick into a snake. And now… bones. Of all the things that He could use, He chose dead bones.  How preposterous!

In chapter 37 Ezekiel “was carried away by the Spirit of the Lord to a valley full of old, dry bones that were scattered everywhere across the ground.” Then God asked Ezekiel a really important question, “Can these bones become people again?” Ezekiel gave Him the best answer, “Lord, you alone know the answer to that.”

If dead bones are not out of God’s power, how can your ruins be? He told Ezekiel to “speak to the bones and say: ‘O dry bones, listen to the words of God, for the Lord God says, ‘See! I am going to make you live and breathe again’ “(Ezekiel 37: 4-5).  Ezekiel watched as the bones began to receive flesh and muscles. God then told Ezekiel to call for the wind, and the bodies received breath, and became a “living soul.”

Hope is a fleeting thing while you are in the ruins. This moment you may feel like the people of Israel felt while they were in the ruins of exile. You may feel like God has turned His eye completely away from you. Maybe you often say what the people of Israel said, “ ‘We have become a heap of dried-out bones—all hope is gone.’ But tell them, ‘The Lord God says: My people, I will open your graves of exile and cause you to rise again and return to the land of Israel. And, then at last, O my people, you will know I am the Lord’ ” (vs 11-13).

What a promise? The same God who was lashing out judgment after judgement says to Ezekiel, “tell, My people.”  The rebellious, stiff-necked, adulterous, idolatrous prostitutes of a people, are His people. We are His people, as wretched as we are, we came from His heart and His hand. Only if humanity would realize this. Only if we could see the Love of God in the ruins. That is all God wanted the people to realize…”that they may know [I] am Lord.”

Always remember that God is a God of dead bones. The ruins may take you to the grave, but God will raise you up on redemption morn. He rules the graveyard. He rules the ruins. Nebuchadnezzar fell from his “high and mighty” throne and landed into the wilderness eating with the animals for 7 years. I can’t image his feelings of hopelessness, regret, or his despair. But I can imagine, his repentance because the Bible tells us that right there in the ruins , he made the most important discovery that God wants to reveal to you…He is Lord of the ruins. Nebuchadnezzar knew that God is God of dead bones. After his seven years of catastrophic ruin, he said, “ I, Nebuchadnezzar, looked up to heaven, and my sanity returned, ….When my mind returned to me, so did my honor and glory and kingdom…Now, I, Nebuchadnezzar, praise and glorify and honor the King of Heaven, the Judge of all, whose every act is right and good..” (Daniel 4: 34- 37)

Amos 9: 14, “I will restore the fortunes of my people Israel, and they will rebuild their ruined cities and live in them again; they will plant vineyards and gardens; they will eat their crops and drink their wine.”